Start here for a successful start toward an engineering degree!

The Engineering Academy is designed to prepare high school students for success in university-level degree programs. Explore the various disciplines of engineering before college as you take rigorous math and science, coupled with hands-on, project-based engineering curriculum. 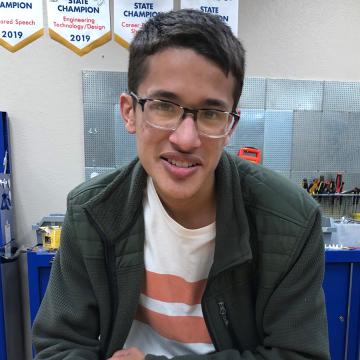 "I want to participate in something bigger than just me." 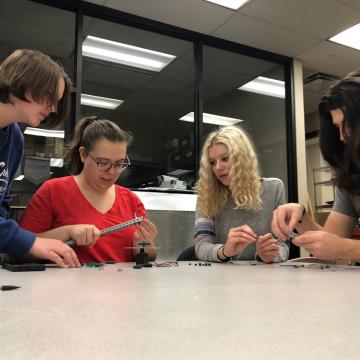 “Since I was little, I loved the idea of making a difference by helping people, thinking at that time I would have to be a doctor to do that. I realized that I could also help people as an engineer by creating things that could make their lives easier.”

Bradley Chisolm teaches science with physics emphasis in the Engineering Academy at the Portland Campus. He earned both Bachelor and Master of Science degrees in Aerospace Engineering at Mississippi State University. Bradley previously worked as a Math Teacher at Oklahoma City Public Schools and as a Project Manager / Senior Fluids Engineer at Schlumberger Inc.

Melony Coen teaches science with math emphasis in the Engineering Academy at the Portland Campus. She earned an Associates degree in Business at Oklahoma City Community College in Oklahoma City, and a Bachelor of Science in Mathematics Education at the University of Central Oklahoma in Edmond, Oklahoma. Melony preciously served as Mathematics Department Head and AP Teacher at Edmond Public Schools, and as a Master Teacher at Oklahoma Energy Resources Board, where she was responsible for many school districts in the Oklahoma City area.

Tracy Cooper is an instructional assistant in the Engineering Academy for Introduction to Engineering Design, Civil Engineering Architecture, and Principles of Engineering classes at the Portland campus. Tracy previously served as instructional assistant in the Portland campus CADD program. She serves as a campus mentor for the Women in Technology program, as coordinator for the Portland Campus Engineering Challenge annual event, and serves on the Edmond Schools STEM Advisory Committee. Tracy also serves the SkillsUSA student organization as a Certified Career Essentials Teacher, Northwest Representative on the SkillsUSA Oklahoma Alumni and Friends Board of Directors, and NW District Advisor for the State of Oklahoma. She is passionate about SkillsUSA and the leadership it provides for students.

Charles Koutahi teaches Trigonometry, Pre-calculus, Aerospace Engineering, and AP Physics Electricity and Magnetism in the Engineering Academy at the Portland Campus. He earned a Bachelor of Science in Electrical Engineering at Oklahoma State University and a Master of Science in Electrical Engineering with focus on Power Generation and Deregulation of Electricity at the University of Oklahoma. Charles has also taught Geometry, Algebra 2, AP Calculus AB, AP Calculus BC, AP Physics Mechanics, Introduction to Engineering, Principles of Engineering, and Aerospace Engineering in the Academy. He recently introduced the StellarXplorers program at Francis Tuttle and continues to serve as a team sponsor.

Lamar Schmidt teaches chemistry in the Engineering Academy at the Portland campus. He earned a Bachelor of General Science Education at The University of Central Oklahoma in Edmond, Oklahoma, and a Master in Educational Leadership at Southeastern Oklahoma State University in Durant Oklahoma. Lamar previously worked as a Science Teacher at Northwest Classen High School in Oklahoma City and served as a Unit Supply Specialist in the U.S. Army.

Jacob Wilson teaches science in the Engineering Academy at the Portland campus. He earned a Bachelor of Business Administration in Finance/Biology from the University of Central Oklahoma in Edmond, Oklahoma. Jacob previously worked as a science teacher at both Carl Albert Middle School and Monroney Middle School in Mid-Del Public Schools in Midwest City, Oklahoma.