Army veteran finds next path in life through Carpentry 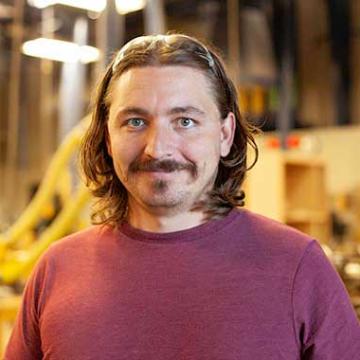 "The fact that I can come in the morning, have an idea in my mind, and a few hours later, it's a physical object; I love being able to create out of just my imagination."

As a veteran, Chris Harris knows a thing or two about working with what you have.

He and a team of carpenters used only what was available to them in the scrapyard to build furniture and cabinets while on a tour of duty in Iraq and Kuwait. After that tour was done, he came to Francis Tuttle to study Carpentry and Cabinet Making, where the wood was better and creating was still its own fulfilling process.

“The fact that I can come in the morning, have an idea in my mind, and a few hours later, it’s a physical object,” Chris said. “I love being able to create out of just my imagination.” Harris turned his enjoyment of furniture making into an education and a part-time job at Preferred Mill Works in Newcastle, where he goes in the afternoon following class. The knowledge and business contacts he gained in the Francis Tuttle shop directly contributed to his hiring.

“People see you’re going to school for this, so you already know about a lot of these tools, you know about the safety procedures that need to be put in place,” he said. “I’ve done more fine-tuning working in shops, but going to school here definitely gives me a leg up, beyond just walking into one of those shops and saying I can read a tape measurer.”

With his Francis Tuttle education and work experience, Harris plans to one day own a furniture-making business. Carpentry and Cabinet Making Instructor Bryan Kropfinger has introduced a few extra concepts for Harris to better prepare him for life as a business owner.

That includes knowledge of the shop’s computer numerical control (CNC) machine, which uses computer precision to create intricate designs and cabinet pieces out of wood. Harris said knowing how to use this machine gives him an immediate advantage when it comes to finding a job.

“Literally with that one, you’re just limited by your imagination,” Harris said. “If you can design it on the computer, it’ll make it for you.”

In addition, Harris rose up to President of the Carpentry Skills USA team. He leads the way when it comes to professional growth activities and preparation for competition in the spring.

“It kind of tests my abilities,” Harris said. “I’m one of those people who likes working on my own timeframe, so this lets me see what I can do in this amount of time if I’m getting down to it. I definitely noticed things I need to improve on and got to work on those.”

Students in Carpentry & Cabinetry created a movie set from start to finish for a local, professional film project

Whether he goes to college or looks to advance in carpentry and cabinet making, Luke Ballinger leaves high school with good options.