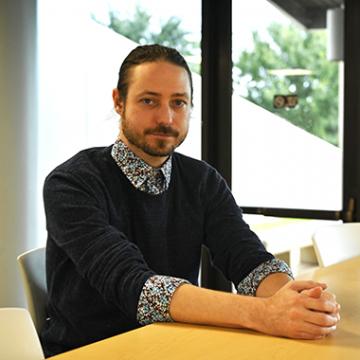 "The job I have now, I don't think it's anything I would have applied for previous to my experience in Francis Tuttle. I don't know if I would have felt confident in my abilities."

When there was nowhere else to go in his native Houston, Chris Elliott made the trip north to find his path.

The former musician was looking to change careers and forget about part-time service jobs. Since he had already done promotional work for his band, graphic communication jumped out to Chris as something at which he could excel.

“I was looking for something that would elevate me out of my position in the service industry, and I have always been an artist,” Chris said. “So graphic communication seemed like an appropriate path.

“I did some stuff with promotion for the band and our various social media accounts – back when Myspace was a thing – and did the t-shirt designs and designed some stuff for my friends. I had a basic understanding of some of the programs that were used. This was an opportunity to really dive into those and get a more detailed education.”

Chris took the part-time Graphic Communication course at Francis Tuttle and worked as a waiter at the same time. He graduated in May 2019 and now he is creating promotional materials for local TV channel Fox 25 in Oklahoma City.

“I like the way the curriculum is set up to where you take the courses kind of at your own pace,” he said. “It’s really easy to get focused having an environment where you have a set schedule, you come in every day.”
Chris said he was particularly attracted to the Francis Tuttle program by the opportunities for hands-on, real-world work. Instructor Liz Dinkins showed Chris one of those projects when he visited the campus.

“One of the things that excited me when I came and talked to Liz is she said one of the projects was a children’s book,” Elliott said. “I thought that was a cool way to use the aspects of my creativity as well as the technical aspects of the program. That was definitely one of the draws.”

Something that truly made a difference for Chris was competing in the Business Professionals of America (BPA) competitions, both at the state and national levels. Without that experience, Chris said he wasn’t sure if he’d have ever applied for the marketing job he has now.

“That helped tremendously build confidence. The job I have now, I don’t think it’s anything I would have applied for previous to my experience at Francis Tuttle,” Chris said. “I don’t know if I would have felt confident in my abilities. When you go to a competition setting and do well, it really helps you to be more confident in general.”