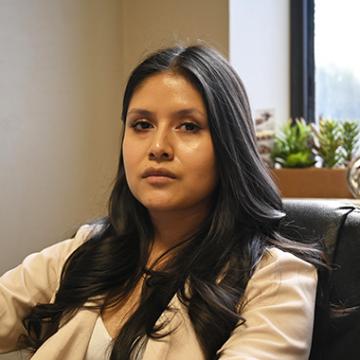 "Every time someone says you don't need school for graphic design, that was me back when I was 15."

Yadira Cruz has advice for students interested in a graphic design career: you definitely need the classes.

“Every time someone says you don’t need school for graphic design, that was me back when I was 15. I thought you can learn it on YouTube or whatever,” she said. “But whenever I got to Francis Tuttle, it was like, you can’t learn this stuff on YouTube. You do need to go to graphic design school.”

Cruz graduated in 2016 from the Graphic Communication program at Francis Tuttle. She is now the lead designer at Green Rhino Graphix right here in Oklahoma City, where she spends her days designing the graphics for shop windows or even the logos and patterns that are then wrapped around vehicles.

“Printing them and getting them to be the right size is really complicated,” said Cruz about the vehicle wraps. “But I decided to come on board, and now that I’m here, I actually like doing them. They’re huge and people see them and they like them.”

Cruz chose Graphic Communication simply because of how much she enjoyed creating images on a computer. While at Francis Tuttle, Cruz admits she wasn’t always excited about the book work required. But now as a professional, she wishes she had done even more.

“Had I taken the time to go through every single step, I could have designed it better. That’s the only thing I wish I had have done, it taken the time to learn,” Cruz said. “It is boring, yes; but it helps. Now I wish I could get that book back.”

Cruz was also able to land a job in the production side of the industry while she was still at Francis Tuttle. Combined with her school work, this gave her experience in both the design and conceptualization and printing aspects of her job.

Once she has finished designing a storefront or vehicle wrap, Cruz can oversee the physical printing of that design. It’s one of the best parts of the job.