From knowing very little English to landing a job with the IRS, accounting has given Rosine a career path to success in America. 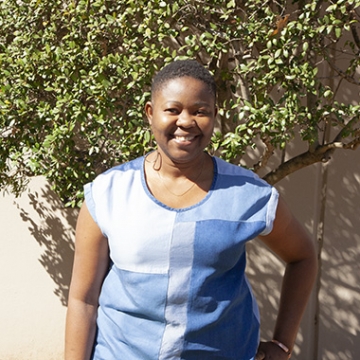 "It is hard, and it is challenging, but when you think about the result, when you will get it and how happy you will be, that gives you more strength to keep going."

When Rosine Kabi came to the United States from Cameroon, she barely knew any English. But, she did know numbers.

In under two years, she had mastered the Full-Charge Bookkeeper program at Francis Tuttle and vastly improved her English. She was then able to attend Oklahoma City University, from which she earned her Master’s of Science in Accounting in 2019 and recently landed a job with the IRS.

“I wanted something full, something where I would learn everything,” Rosine said. “I found the Full Charge Bookkeeper program was a complete program for me. That helped me to understand U.S. accounting, the English accounting vocabulary and how to present a balance sheet.”

Back in Cameroon, Rosine had already studied accounting and economics in college. Initially, she wanted to become an airline pilot and began focusing on math, but her uncle suggested she should switch career paths and that turned out to be a wise decision.

“It was very easy to get,” Rosine said about studying accounting. “My friends and classmates called me the assistant teacher.”

She graduated with a concentration in auditing accounting and management control. But that was all in French — a predominant language spoken in Cameroon — and when she came to the U.S., Rosine knew she would need to re-learn similar concepts in the American system and in English.

So she began taking English as a Second Language classes and, at the advice of her friend, enrolled in Francis Tuttle at the Reno Campus. Learning predominantly through the computer was a new concept, but Rosine adjusted quickly under the supervision of instructor Paula Yanik.

“I’m old school. I’m used to having the professor in front of you, and back home they say, ‘It’s time to take notes,’” Rosine said. “But here it’s different, and that helped me a lot. With time, I understood what it means to be a self-learner and to challenge myself.”

Rosine is now working toward becoming a CPA while working for the IRS. Reaching this milestone in her career path through Francis Tuttle is a special feeling for her.

“I wanted to give up thousands of times. I wanted to go back home,” she said. “But I’m still here. And when I see the result, I’m really happy. It is hard, and it is challenging, but when you think about the result, when you will get it and how happy you will be, that gives you more strength to keep going.”

After completing her high school degree through Francis Tuttle's Project HOPE, Kyla Hopper went on to graduate from the Full-Charge Bookkeeper program and secure a job at People's Bank & Trust.

Accounting is a universal language for Schneider Njifunuh

From her family's store in Cameroon to Francis Tuttle's Accounting program, numbers guide Schneider toward her career.