Accounting is a universal language for Schneider Njifunuh

From her family's store in Cameroon to Francis Tuttle's Accounting program, numbers guide Schneider toward her career. 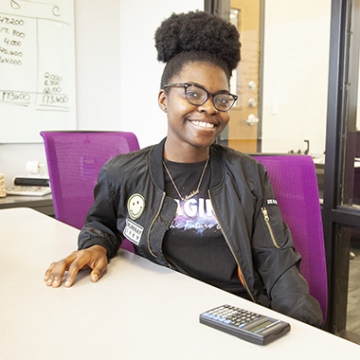 "I started doing accounting back in Africa, and when I found out Francis Tuttle had accounting, I decided I was just going to jump right in."

From around the time she was 10 years old, Schneider Njifunuh would spend her time outside of school making sales and counting change at her family’s store in Cameroon.

Now a Putnam City High School student, Njifunuh is using that experience and the Full Charge Bookkeeper program at Francis Tuttle to carve a career path for herself in accounting and finance.

“I want to be a CPA,” Schneider said. “People say the board exam is hard, but I’m going to study for that, no matter what.”

She chose accounting because it was something she was comfortable with. After all, Schneider grew up helping her family make a living by running a general store.

“When I was growing up, my family had a store. So I’m more used to money and interacting with people,” Schneider said. “I used to have to exchange cash really fast. I started doing accounting back in Africa, and when I found out Francis Tuttle had accounting, I decided I was just going to jump right into it.”

The concepts weren’t difficult to pick up on, but Schneider said it was new to learn by using a different currency and do most of her work on a desktop computer.

"It was different because here I use computers,” Schneider said. “Back home, there were no computers. It made it easier than drawing all of the tables.”

Instructor Jayne Hudson keeps classroom time fresh by steadily building from one lesson to the next. Schneider was able to adjust quickly and has now been accepted to continue her studies at Southern Nazarene University.

“Sometimes it’s just thinking. It’s just common sense to calculate numbers,” she said. “I feel prepared [for college]. You just go in knowing most of the stuff, so it’s just about getting more used to it.”

From knowing very little English to landing a job with the IRS, accounting has given Rosine a career path to success in America.

After completing her high school degree through Francis Tuttle's Project HOPE, Kyla Hopper went on to graduate from the Full-Charge Bookkeeper program and secure a job at People's Bank & Trust.