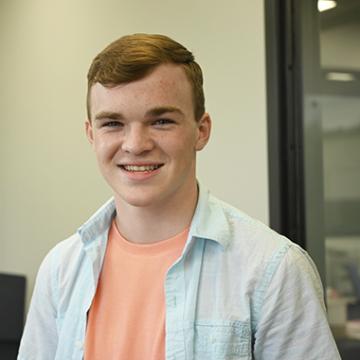 "Coming to the academy was very hands on. You're doing it yourself, building it from scratch. It's more in-depth of what I wanted from a computer science course."

For many years, Logan Hutchens knew he wanted to pursue a career in the world of video games. Attending the Computer Science Academy only enhanced that dream and brought it closer to reality.

Hutchens said he plans on majoring in computer science now, with a focus on game design and programming. Thanks to the academy, he has a clear path in mind for himself.

“You’d be hard-pressed to not find me with a Nintendo DS in my hand from the age of 5,” Hutchens said. “That fascination continued to grow into how do I make this, how does this actually work and if I press up on the joystick, how does my character actually move? This fascination developed into my desire to pursue computer science because I wanted to find out how to make these things I love playing so much.”

Hutchens said what he found at the academy was different to what he expected. The hands-on approach maintained his interest during class, and the steady pace made it simple to pick up on more complex material.

“Coming to the academy was very hands-on. You’re doing it yourself, building it from scratch. It’s more in-depth of what I wanted from a computer science course,” he said.

“You hear coding, and it’s like, aw man, that seems so hard to work out and to do. Even in the first few days, our teacher was leading us how to do it, and I was getting lost. But from class to class, breaking it down into steps, it really helps you to take bite-sized pieces out of the big concept. You can actually wrap your head around it and grasp it. Through that, I’ve been able to develop pretty good coding skills, to where I can do most things.”

Studying computer science has also helped Hutchens’ understanding of several subjects and operations since computers have become such a big part of everyday life. In that sense, studying at the academy has better prepared him for life in general.

“Now it’s easy to see there are limitless opportunities and advancements we can make with this. With each new discovery, we say ‘Oh, we can do this better or more efficiently.’ Every year, it’s new, it’s better, and it’s hard to see if there ever will be an end to the expansion and growth of computer science.”