Computer Science and the Vastness of Space

Blythe Sousa has many interests, but is focused on game development in the Computer Science Academy. 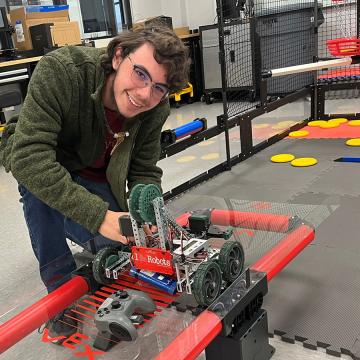 “I like having the knowledge that I can program a computer to do almost anything you could imagine.”

He plays Bluegrass guitar to relax, but Crescent senior Blythe Sousa has computer programming in his soul, too. He admitted he daydreams a lot, staring at the stars, and his broad background of interests links to his wonder of the vastness of space, which exploring later in life is also in the back of his mind.

Blythe loves technology, in general, playing video games and competing in e-sports, but he also participates in Speech, and with his love of pets, especially dogs, he has had thoughts of becoming a veterinarian. He nonchalantly reflects “I’m into a bit of everything.”

Computers have a role in most of his interests, and he jumped at the chance to apply his computer networking skills when he was challenged to re-configure Crescent elementary school’s computer lab last Summer. He was interested in Francis Tuttle’s Computer Science Academy, but thought his opportunity to attend passed when he missed the day of a school visit.

A friend who had graduated from the Academy told him he needed to apply and take advantage of the opportunity. Now he’s learning how to make a computer create and react to changing environments.

“I like having the knowledge that I can program a computer to do almost anything you could imagine,” he exclaimed.

He is working with a team to develop a game by implementing the most challenging parts of some different games into one, and says the hardest part is to hone in on those components. A major focus for him this school year is working to earn a scholarship to Oklahoma City University’s computer science program.

He has always wanted to find a way to help people, and one way he can accomplish that is to tell anyone interested in gaming or programming to check out Francis Tuttle and the great opportunities he’s had as a student.