Stylist to the stars Teresa Luz

Teresa never thought an FT education could take her to Hollywood and beyond. 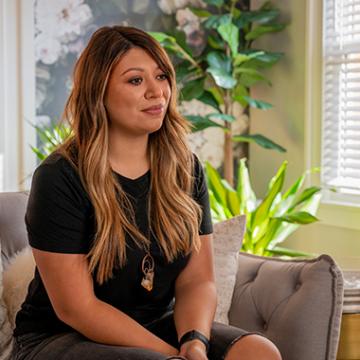 "I know hair, skin and nails. There are times when I'm on set, and they'll say 'We need these nails painted,' or 'We need this done.' And you have to have that extra knowledge. It makes a difference. In the beginning, you may not like it, but all of those extra things come in handy."

So much of Teresa Luz’s career story could be found in the scripts her clients read from.

The Mustang High School graduate attended Francis Tuttle Technology Center knowing she loved making people happy by making them beautiful. And by the time she graduated from Cosmetology in 2010, she knew how far that passion could take her if she worked hard enough.

“I went in thinking I wanted to do all of these things, but I assumed because I’m in Oklahoma, those things wouldn’t be available to me,” said Luz. “That I would have to live in L.A. or New York, and there’s no way I’d be able to do that.”

Now as a freelance makeup and hairstylist, Teresa serves Oklahoma City and Hollywood stars. She has been working in the industry full-time for seven years, and Teresa said the variety of education she received in Francis Tuttle’s Cosmetology program more than prepared her for a successful career.

“Because I took Cosmetology, instead of just taking an esthetician course, I have more of a knowledge,” said Teresa. “I know hair and skin and nails. There are times when I’m on set, and they’ll say ‘We need these nails painted or we need this done,’ and you have to have that extra knowledge. It makes a difference. In the beginning, you may not like it, but all of those extra things come in handy.”

Teresa was a student of Cosmetology instructor Sheila Kissick. She said the same kind of friendly, encouraging atmosphere that brought her to Francis Tuttle kept her going in the classroom.

“Sheila Kissick was such an amazing teacher,” she said. “She was so involved. Anytime any of us had any questions or were struggling with something, she never had a problem with taking the time to help us.”

And at Kissick’s urging, Teresa took additional workshops after she had graduated from the program. It was here that she found her way into show business.

“Ms. Kissick always talked about continuing education,” Teresa said. “And I took workshops in LA, New York and in Dallas, and those gave me the contacts I need to get the jobs I get to do.”

Now thanks to her contact, Teresa has a lengthy list of celebrities she has worked with. Kate Flannery, best known as Meredith on the U.S. TV series “The Office,” is among them, as is 1970s star Bo Derek and Dean Cain of Superman TV series fame.

Teresa also attended New York Fashion Week, where she styled hair and makeup for tennis star Serena Williams and actresses Eva Longoria and Rosario Dawson. In between her jobs with the rich and famous, Teresa is booked for weddings and special events and has a permanent workspace in Oklahoma City’s Plaza District.

“This is an extremely hard industry to be in, and that’s what Ms. Kissick said. It’s going to take constant work. You cannot give up,” Teresa said. “If it’s something you truly love doing, you’ll have to give it your all. Also, realize that your colleagues, other people in your area, they’re not your competition. It’s the best way for you to get jobs. The more people you know in the industry, the more opportunity there is.”

Savanna Williams wasn't sure about barbering until her Francis Tuttle instructor gave some encouragement. Now, she holds a national competition medal and a commendation from the governor.