Zach Lund likes to work with his hands, and that's perfect for collision repair 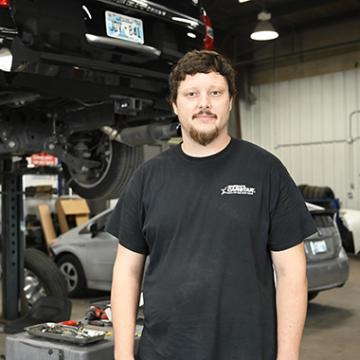 "I started when I was 16 and had a fender bender. Fixing that kind of led to this."

Zach Lund was never interested in a desk job. He likes being up, active and working with his hands, so welding seemed like the perfect program when he attended Francis Tuttle the first time in high school.

But a few years later, Zach said he was looking for a new path, but the same qualities in a job. Automotive, specifically collision repair, was his answer.

“It started when I was 16 and had a fender bender,” Lund said. “Fixing that kind of led into this. If the battery dies or the alternator goes out, I would want to do it instead of paying someone else to do it.”

Lund now works for Jeremiah CARSTAR Collision in north Oklahoma City, and he’s not the only Francis Tuttle student to go there. Owner Jeremiah Graham is a part of the automotive advisory board and, as a result, he knows the quality of the employee that comes out of the Francis Tuttle program.

On his first day, Zach said he had two work orders for vehicle frame swaps, in which the internal workings of a vehicle are taken out and placed in a new, pristine frame. It was tough, but Zach knew exactly what to do thanks to his Francis Tuttle training.

“Doing two in a row fresh out of school was a little overwhelming, but I got it done,” he said. “The boss was pretty impressed.

“We had most of all the equipment that is out in the industry now at Francis Tuttle. Today’s cars are built lighter, so the metal is different. There’s sensors, airbags, and even the Teslas, which have the autonomous driving. There’s all the electronics, stereos; there’s just a lot.”

With the number of cars on the road projected to increase even more in the coming years, the demand for automotive technicians and collision repair specialists will also rise. People like Zach can find a path to a fulfilling career through Francis Tuttle’s programs.

“I love it looking nice in the end. It comes in all crumpled, and when it leaves here, it’s back to where it was before the accident. I’m moving around, working, not sitting at a desk typing. I just like working with my hands.”

The art of collision repair