Explore your love of computers, programming and coding while preparing for college

Are you a high schooler who loves to code? Does the idea of creating your own computer programs or video games sound exciting? Then this is the place for you! In the Computer Science Academy, students study advanced placement science and math alongside computer science courses to prepare them for similar study in college. Students complete advanced courses in physics, chemistry and calculus, while also learning how to code, how to build websites and about the components that go into video game production.

Students attend up to three (3) years, and graduates should be planning to pursue a college or university track to earn a degree in some discipline of computer science. College credit for Advanced Placement courses is available upon passing the appropriate AP College Board Exam(s).

This program is designed to prepare students to pursue a college degree in some discipline or computer science. After degree completion at an accredited college, a variety of computer science positions are available. Potential employers include corporations, educational institutions, small businesses, self-employment, and more. 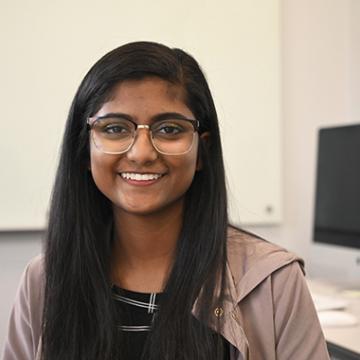 In addition to an interest in computer science, success in this career field requires strong math, science and critical thinking skills. A positive attitude, perseverance and willingness to adapt to new technologies and methods of performing work are also essential. In addition, computer science professionals must be able to work both independently and as a team member, and must be able to prioritize and manage projects and tasks to meet deadlines.

The median salary for a computer program, according to the Bureau of Labor Statistics.

Sherilyn Herndon teaches math in the Computer Sciences Academy at the Rockwell Campus. She earned a Bachelor degree in Education at Oklahoma State University. Sherilyn previously worked as a Math Teacher at Mustang High School in Mustang, Okla., and at Memphis Independent Schools, in Memphis, Texas, and Pflugerville Independent Schools in Pflugerville, Texas, and as a Content Author and Editor for American Education Corporation/K12Inc.

Bryan Kitzrow teaches in the Computer Science Academy at the Danforh campus. He earned both a Bachelor of Science in Mathematics, and a Bachelor of Science in Secondary Education at Oklahoma State University, and is certified to teach Physics, Chemistry, Math (including middle school Calculus), Introduction to Engineering Design, Principles of Engineering, Engineering Design and Development, and Computer Integrated Manufacturing. Bryan previously worked as a Calculus instructor at the Oklahoma School of Science and Mathematics in Oklahoma City, and as a Pre-Engineering Instructor at Central Technology Center in Drumright, Oklahoma.

Shane Martin is an instructor in the Computer Science Academy at the Rockwell Campus. He joined the Francis Tuttle family from Deer Creek High School where he taught AP Physics. Prior to that he was a Math, Life Science and Physical teacher for Piedmont Public Schools. Martin obtained a Bachelors of Science in Fire Protection and Safety Technology from Oklahoma State University in Stillwater.

Jeff Wooden teaches Computer Programming in the Computer Sciences Academy at the Rockwell campus. He earned both a Bachelor in Business Education and a Master in Educational Leadership at the University of Central Oklahoma in Edmond, Oklahoma. Jeff previously worked as a Technology/Robotics Instructor at Deer Creek Public Schools in Deer Creek, Oklahoma.